Danny And add Michael had to bring nothing for the fair. Anything Sweet Plants from the garden, Maybe a pair of shoes that were Too small,  some books, or a cake.They asked their mother too bake a cake for the fair, but she hated baking and said no. Michael said, “Can I look in the plastic bag whereyou put all the things you don’t want any more?”
His mother said yes. Michael found a red scarf, a green and white tablecloth, nd a tapa cloth with a black pattern all over it.


“That’ll do me”, he thought. He showed the things to his mother and she said it was all right to take them to school for the fair. So Michael did. But Danny didn’t have anything to take. The next day he came home fromschool with a card-board pattern for a big floppy clown. “Will you make one for me?” he asked. “I’llhelp.”


“All right,” said his mother. They found an old pink silky dress, an old white pillow case , some brown wool, and Dad’s old blue jeans. They put the pattern on the pillow case and cut out the shape of the clown- his arms, long legs, head, and body, Mum sewed him together. Then Danny stuffed his body and head with old panthose and socks. “He needs clothes,” said Danny. The next day, Mum made a pink shirt out of the old dress, and some baggy blue pants from Dad’s old blue jeans. She used the brown wool to make some hair for the clown’s head, and knitted some booties for his feet. “He needs a face “, said Danny. They found some black wool for a mouth, and some buttons for eyes. “He needs a hat ,” said Danny, “with a pompom on top.” So Mum made a pointy hat with a pompom on it. “I love him ,” said Danny. “I’m going to call him Bobo. I want to keep him.” “But he’s for the school fair,” said Mum. “Can you buy him for me?”  “No,” said Mum. “It’s all right, Danny,” said Michael. “I’ll buy him fou you now, with my five dollars fair money. It can be my present for your birthday next month. You can take the five dollars to the fair and give the school the money instead of the clown.” Danny still had his own five dollars fair money. On saturday they all went to the fair. Dad bought some plants and some ice creams. Mum hated baking, so she bought a cake. Danny looked everywhere for something that his mother would like. Finally, he bought a red scarf and a green and white talecloth, and a tapa cloth with a black pattern all over it. They cost five dollars. “Look what I bought you, Mum,” he said. “I know you’ll like them.” So the family ended up with all the things Michael took to the fair to sell, and Bobo the clown, that Danny wouldn’t take. 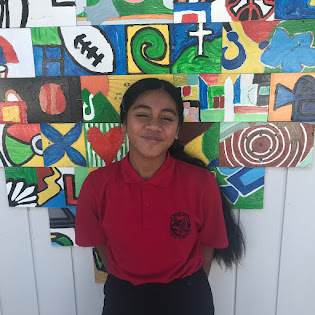 Hello there! My name is Sauma, I am a year 8 Student at Pt England School. This year I am lucky enough to be a prefect. I am also fortunate enough to have 5 amazing teachers, Mrs Stone,Mrs Tele’a, Miss Tipene, Mr Moran, and Mrs Ilaoa.
My culture is Samoan and Tongan.
I am lucky again to come from a family of seven, which I am the second oldest, with two sisters,two younger brothers and an amazing Mum- (Tongan) and Dad-(Samoan).
What I enjoy most in my life is, keeping motivated, Studying, Maths, Reading, Writing, Public Speaking, Netball, Tag, and Baking.
I would love to be a lawyer when I grow up. I want to have the ability to help others, and because I want to have the chance to make the world better.
Please make sure to leave a positive comment.

Who is visiting this blog?